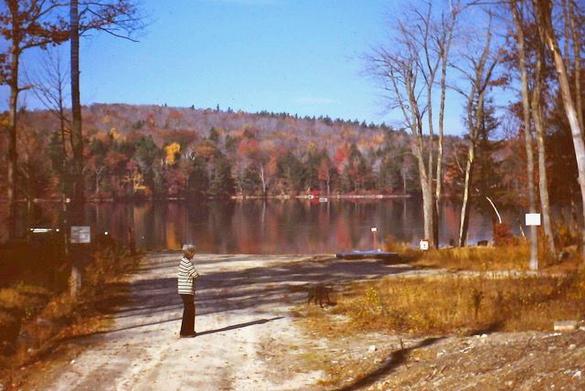 We purchased our lot in May of 1967 after looking at many developments in NH. We were the 7th owner in Hidden Valley at that time and did not plan to build right away. By the end of the month we had settled with the developer (Sid) to build the shell of the chalet and we would finish the inside. We were in the house with amenities by Oct of that year. There were 5 cottages built by a previous developer that had not sold,  Joe Ryan, Joe Heuston and Bill Dawson  and Tylers and one between Dr. Banks and Dr. Steinman.   There were owners who had been on the lake before any development; Urquaharts, Antells, an  aunt of the Antells and  Mrs. Jones along the east side of Beech Pond. Some were not at all happy with the developers; one being Mrs. Jones who put a chain across the Rd and kept HV Drive from being extended for several years.  Sid had a barbecue for the new comers that fall and we got to meet the Antells at that time.   He and his partner developed Sunrise Shores in Farmington and as that was a 6 month community they found this property to build year round homes. They built a huge 4 bedroom Lodge for perspective owners to come and spend a night and a place for the salesmen to stay also. Sid’s Sect., Ruth, did all the cooking and most of the work.

In 1968, more houses were built on Ethan Allen Dr and Alberg , Heritage and Bishop’s Gate and along the frontage of the pond. Most of the families had lots of kids and life-long friendships ensued. We saw how quickly things were moving and purchased the lot next to us that year. The lake was so clean that the Urquaharts drew their water from the lake as did others. As it was the 60’s other people came to use the lake from outside. One group came from Calif. in a VW bus. They were staying at an old farm on a road off of Federal Corner Rd. It was an alternative Pop psych group into deep discussions/ touchy/feely things. I used love to sit near them and listen. Actually they were true hippies living simply in a group. One gal was very pregnant and sewed all her baby clothes by hand while on the beach. In the fall they  were driving back to CA and were in the VW bus when she was due. I often wondered how she made out. They had a small theatre (avante- garde) in the barn and Harriet, Dot Sullivan and I went to a play there on a Friday night.  It was something else!! The head person, a Doctor I assume, loved to swim across the lake. He was very blond and you could not see him with the glare of the sun. He asked my sister-in –law, Harriet, to row our boat across to the rock while he was swimming as “retired Ralph” had purchased a speed boat and was learning how to operate it. We teased Harriet for years; mother of 5 and getting hit on by that guy. Oh the group also would come over and wash their hair in the pond! Ralph lived in the A-frame and the first winter he dug out his cellar. During the summer he continued and paid our son, Chip, a quarter to hold the stick / rock in place while he dug!! I found out about this after the fact!! The Chisletts were wonderful neighbors and were good to all the kids. They never complained about the noise.  When Harriet would come for a week with her 5, Dot Sullivan with her 5, Marilyn Belair with her 4 kids there would be no room on the beach!! 16 kids at one time! Lots of noise for sure!

Finally Sid won the case and Mrs. Jones had to take down the chain and all of HV Dr. was developed. And then, in late 1970, we heard from one of the salesmen that the property was for sale. Sid had installed a second water system to take care of HV DR. and future development. Many of us realized that our deeds were not complete re: marina and 2nd beach; ski slope and of course the roads.  Fortunately we had Fred Bowler (who ran the Lynn Housing Authority) and Bill Fitzgerald who spent many long hours putting together an Association for us and we voted to become a group.  People signed up to be Directors in this process and to negotiate for the group. We gathered on July 3, 1971 for an Organizational meeting with a lawyer. We hired him to set up a meeting with Sunrise Development Corporation to discuss matters of concern. . In Dec. 1971, Sunrise agreed to the conditions set forth and Hidden Valley Property  Owners  Association became a formal entity  in Jan. 1972. Sid put in 2nd beach over the debris of rocks and stumps  and put sand  down the hill w/o a road  (consequently it has been rebuilt 3 times)and built a marina.  The ski slope w/o a lift would have been too costly to maintain and operate due to Insurance and State inspections.  We agreed to leave it as common land.  As for the roads…Sid put down oil and sand on most of them which of course did not hold up. Many   summer weekends   Frank, Dan and the kids would put down patch on Sat mornings. We always regretted not leaving them as dirt. Maintenance would have been a lot easier!!

In Sept. 1972, the remaining property  and the water system were put on the market and purchased  by Dominic Amoruso .  He had his office at the first house on HV Drive. He finished developing Valley Rd and the upper area. He had a wife Rene and 2 sons who spent the summers with their dad as Rene worked in Ma.  Frank built the sign for Dom and he and Chip built the wall in 1977. The lodge was privately sold in the early 70’s.The Association was run by volunteers who did all the work; putting out docks, ropes for swimmers, road patching and sweeping/ clean up of roadsides. Tuftonboro plowing was done by the Walter Smith and Richard Clough plowed the Wolfeboro section for Dom. Dom died from a heart attack in Dec, 1981 and Rene took over the business while still working in Ma. The Association then took on more responsibilities; with more specific duties that continues today. We have voted via mail to adopt and update the governing by laws of the Association that Fred and Bill designed several times. We had a small budget and dues were increased as needed to sustain the operations of the Valley. These low dues have kept us from having to hire a manager. Many people served as Pres. in the early days and in particular, we owe Linda Dawson thanks for serving as Pres. for over 14 years!  So many other local Associations disbanded and went bankrupt during that time.   In the late ‘8o’s Rene decided it was too much and sold what was left and the water system.  In the 90’s Beech Pond Water Assoc . was formed for voting  residents of Tuftonboro  and Wolfeboro with deeded rights to the Pond. The work to replace the Dam was begun by Mr. Urquhart and Frank in the early 70’s in hopes of having the State Legislature vote to replace it to no avail. The new Water Assoc. worked for many years to replace it which finally happened in 2014.

In the 1990’s we had newly retired men move to the Valley who were eager to take over the reins. We have had volunteers who have spent hours dedicated to the Valley and it has prospered for 50 years.  Beech Pond is our greatest asset:  its’ cleanliness, beauty and wildlife are such a gift and appreciated by all. The Tennis court was rebuilt, the Marina replaced twice,  2nd beach rebuilt at least 3 times and 1st beach restored in 2020. All because the Board members for  50 years  have  willingly  dedicated many long hours to the Hidden Valley Property Owners  Association for the benefit of all who live here.  The HVPOA has been fortunate to have had these devoted volunteers through the years.  I thank them all for their service.